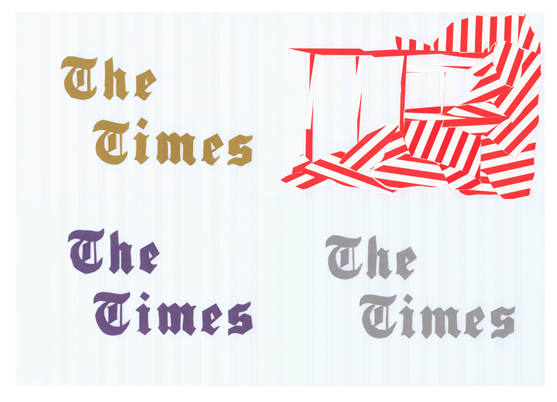 Meteor strikes the northern hemisphere in 2013………travels back in time to 1970 to resurrect Smithson’s Partially Buried Woodshed……….travels forward in time to an imaginary future headline on the front cover of The Times-Picayune.

When the meteor hit Russia this past February, a circular, blurry, glowing mass with a trail of gaseous smoke was reproduced on the cover of every major newspaper. Videos were soon uploaded onto YouTube and other sites that captured the event unfolding in real time, along with its slam (signaled by the camera’s shake) into the earth. These photographic images, ghostly and serene, seemed to be lost in time, simultaneously past, present and future.

While examining the formal qualities of the reproductions, and reading about the meteor traveling at sixty times the speed of sound, I began to think about the space-time continuum, and the possibility of a different order of travel altogether. I imagined the meteor’s dramatic descent into the earth’s atmosphere striking back in time, in the year 1970, on the campus of Kent State University in Ohio, where Robert Smithson constructed Partially Buried Woodshed. On the site where this work was originally built, foundational remnants mark the land, amidst nature’s progress and changes the university has made to its surrounding landscape. Partially Buried Woodshed, a structure that was intended to disappear into the environment, continues to maintain an absence / presence in public memory as many historical sites do. It exists in between the demarcated areas of battlefields and public space, a transformation from an artist’s work to a site of remembrance. Hence, May 4, 1970— the date of the Kent State shootings  and once anonymously written in white graffiti on Smithson’s work—is now a diachronic, layered mythology embedded in the history of Land Art, protests against the Vietnam War, and state violence directed against U.S. citizens.

That moment back in 1970 seems apropos for the target of the meteor’s path. As it explodes and hits the ground in the past, history is brought into the present in fragments, spreading the possibility of repetition or revision in a lateral direction, throughout various networks.

The force of this meteor and its energy field conjures up these historical shards, jolting an ossified collective memory, and Smithson’s work reappears in the public imagination, in situ. A moment later, the meteor zooms forward in time, lands on the front page of The Times-Picayune, in New Orleans, and plunges its ethereal mass into the headline, “Waiting for a miracle, still…”

This artwork originally began with a copy of The Times-Picayune, November 7, 2012, that was given to me by an art historian (and friend) at Tulane University upon her return from New Orleans after the presidential election. We were both living and working on the east coast at the time, and I had described to her how I was collecting various texts from newspapers and printed material from museum institutions, for use in new projects addressing language and form. A photograph of The Times-Picayune’s logo subsequently became part of an installation I created in a gallery vitrine in Brussels this past December, linking the materiality of the paper, its usages and its contents, to the exhibition as a whole. The Times-Picayune is widely acclaimed for its reporting on the day-to-day unfolding of Hurricane Katrina in 2005 amidst dire conditions, earning it several Pulitzer prizes. It made media attention last year when, following newsroom and staff cutbacks due to corporate decisions from its parent company, the print edition was reduced to three times a week. Themes of survival and the miraculous, hope for better times and participation seem to weave an ongoing narrative in the global economy that, regardless of location, can possibly produce the one neutral meeting space of contemporary experience.

Lisa Blas is an artist from Los Angeles, currently working between the U.S. and Brussels. She utilizes portraiture, still life and site-specificity to reflect upon the visual culture and social history of past and present. The works in this edition are an engagement with the re-use and recirculation of materials from consumer culture and the art world, collected in specific places and times. Using meticulously cut fragments of paper stock originating from exhibition announcements and mass-produced paint swatches from hardware stores, she builds compositions using bright, flat and metallic color, positioning areas of formal density with blankness. The lines of the music paper provide a structural support to work with or against, as the fragments of color push the physical boundaries of a very delicate and almost weightless surface. Working within the poles of photography, collage and painting, she addresses the diachronic and synchronic relationships between her materials and the larger framework of history.