Becky BeasleyThe hole stinks Of Other Potentialities: The Inhabitable Inhospitable Object
Olivia Booth You have to be a real "decider" to cut glass Glass's Frayed Edge
Andrea Büttner Simple objects unfold clear mechanics of their appearance Do something that is easy to do, Epilogue 'material' nr 2, 1959
Nicholas Grider Cockfight in the walk-in closet Culture: A User's Guide
Marie Jager The Danish perpetual calendar encapsulates all time through a very limited set of metal plates
Free Time
Peter Kirby 66No99He Said
33Yes44She heard
55Nice55They felt
77Lovely77you thought
17I do22I read
44Maybe88we asked
88Sure176you replied
O.E.D. Addendum
Darren O'Donnell Wrinkling fingers shall not constitute discomfort but shivering shall
The Social Impresario: Capitalizing On The Design To Be Remembered As Long As It Takes Wood To Rot
Katrina Palmer It moults to an extent that is wholly impractical
Spoiled Wooly Stuffing
Hirsch Perlman When I'm particularly pessimistic, I think of being an artist as something like being the delusional patient who, although in hospital, is certain he is actually at home and while getting into the elevator says to the doctor, "You wouldn't believe how much we paid to put that in."
Squash and Stretch
Olivier Richon Would then the photographic record resemble the culinary activity of preserving food by pickling or smoking it?
A Devouring Eye
Charlotte Smith (Subject) continues to be (exaggerated applause for subject's existence) and an exemplary (reference to status as a cultural and or moral and or spiritual 'linchpin') to all who encounter (subject pronoun.)
Preface Of The Fictional Publication/Text, '(Subject), A Fictional academic publication/text on the subject of'
Roman Vasseur This way there'll be no traces of dad in the food chain
John Stuart Mill Exterminates his Father 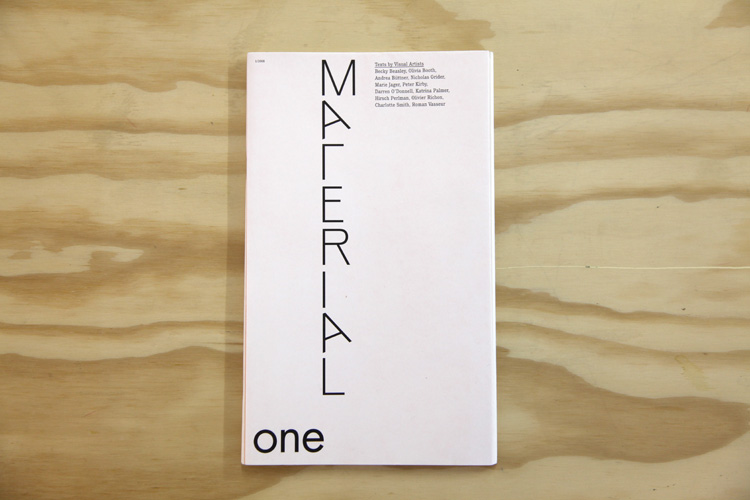 Olivia Booth lives, works, makes, and sometimes shows, paintings (mostly on glass) in Los Angeles. She attended Pilchuck in the summer of 2006.

Andrea Büttner is an artist based in London. She studied Art History and Philosophy in Tübingen and Berlin and Fine arts in Stuttgart, Berlin and London, with recent exhibitions of her work at Frankfurter Kunstverein, Hollybush Gardens (London) and Badischer Kunstverein (Karlsruhe). She is a PhD candidate at the Royal College of Art in London.

Nicholas Grider is an artist and writer currently living in Los Angeles.

Marie Jager was born in Copenhagen, Denmark in 1975. She is now based in Los Angeles where she received her MFA from the University of Southern California in 2004. Her work has been presented in such venues as Artists Space (New York), China Art Objects (Los Angeles), the MAK Center (Los Angeles), Croy Nielsen (Berlin), and Jeffrey Charles Gallery (London). She was included in the 2006 California Biennial and her work was recently part of the DVD Compiler 2 curated by Daniel Bauman and screened at the Swiss Institute in New York. Her work has been written about recently in Flash Art and Artforum.

Peter Kirby is an artist and writer living in London and, occasionally, Cornwall. His work has appeared in the Guardian, Design Museum, Drawbridge Journal, Tate St. Ives in collaboration with Richard Long and the past two London Architectural Biennales. He is currently working on a walking trilogy and a novella with photographer Annabel Elston and designer Kate Tregoning.

Katrina Palmer is an MPhil student at the Royal College of Art Sculpture School, London.

Hirsch Perlman is an artist and Associate Professor and Area Head of Sculpture at UCLA. To purchase his unlimited edition of the official U.S. Army Counter-Insurgency Manual for $29, contact Alexandra Gaty. All proceeds will benefit The Center for Constitutional Rights (working to restore Habeas Corpus) and National Popular Vote (working to abolish the power of the electoral college).

Olivier Richon was born in Lausanne in 1956. He studied film and photographic arts at the Polytechnic of Central London, and graduated with a BA (hons) in 1980 and a Master of Philosophy in 1988. His recent monograph, Real Allegories, is published by Steidl, with texts by Leslie Dick and Darian Leader. He is Professor of Photography at the Royal College of Art, London.

Charlotte Smith is a British artist and writer currently living and working in Los Angeles, California, where she is completing her MFA Interdisciplinary Studio at UCLA. Her practice is an investigation of spatial occupation, appropriation and function, specifically examining the language of intermediate or non-places and the entry of the subject into this structure.

Roman Vasseur is an artist living happily amongst the wreckage of Empire in London's East End. He is also part time Senior Lecturer in the School of Fine Arts, Bristol. He has exhibited at Jeffrey Charles Gallery (London), the ICA (London), and KX Gallery (Hamburg).