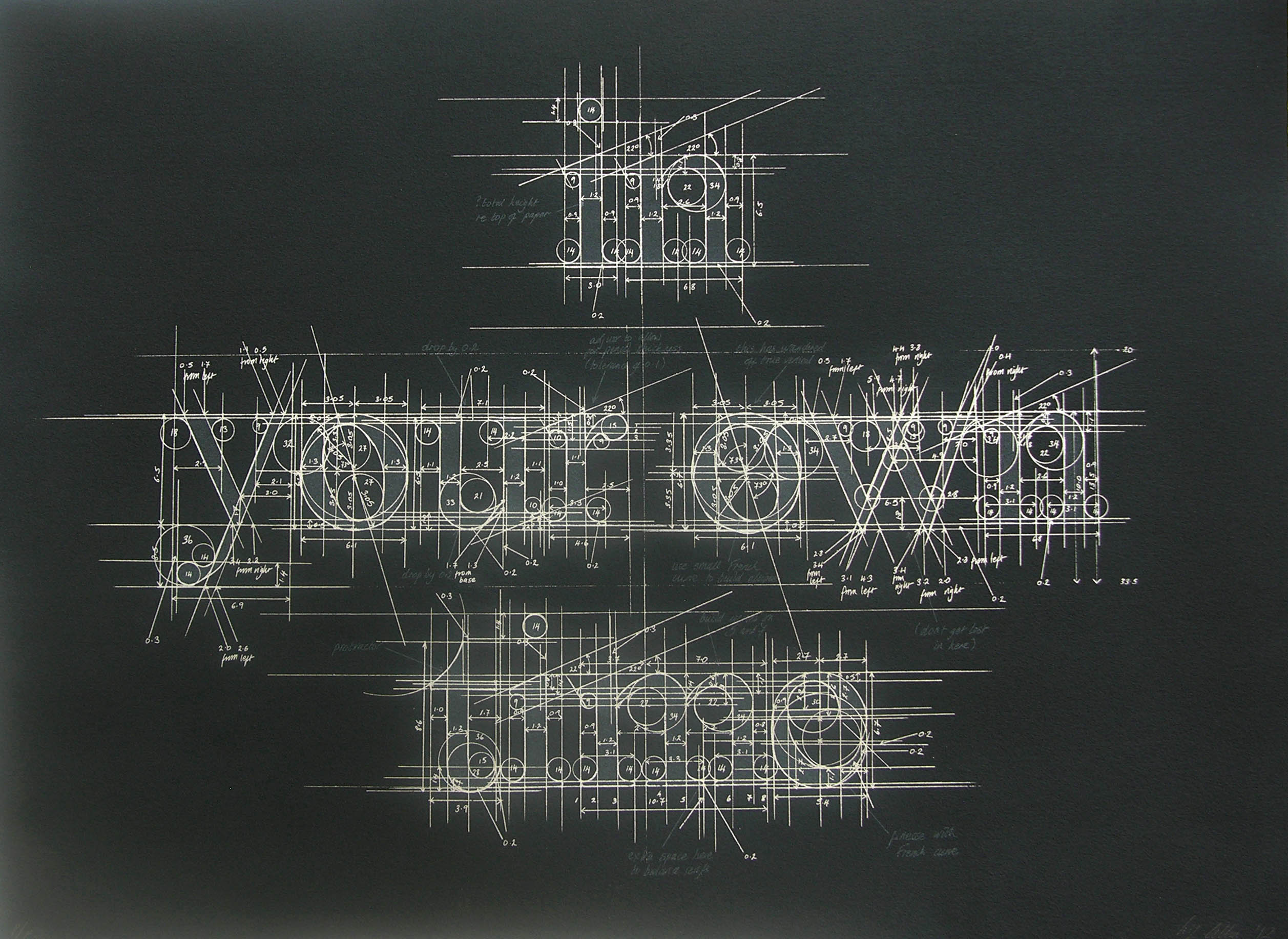 Refraction
-the change in direction of a propagating wave, such as light or sound, passing from one medium to another in which it has a different velocity…

When I started to make this piece of work as an editioned screenprint for the MATERIAL project space, I was thinking about time. But making work in the context of a specifically digital platform has also made me think about what it is we are seeing when we look at digital imagery online. I was reminded of the triple dressing table mirror we used to have when I was a child. Each of the two side mirrors produced a series of ever-smaller selves which streamed away from the centre towards separate vanishing points, one of your back and one of your front, where the images consumed themselves, disappearing into a pair of inaccessible elsewheres.

The image above is the result of the following sequence, constituted by:

What is shown here now, digitally, is something which both is, and isn’t, the sum of these parts. The digital image above now enjoys autonomy and plurality in its world of online refractions. It has its own existence in the digital arena—and its relationship over time to the words, and to the editioned screenprint itself, becomes increasingly tenuous. For example, the original pencil drawing from which the stencil for the screenprint was made is of a size which relates specifically to the materiality of its making. The measurements of its construction are weakened in the dematerialised digital version. It can become any size. Online it becomes available for infinite reproduction and onward transmission, with its dimensions and colour variable, and its paper texture smoothed through the glass of the screen. Changes in resolution over time will blunt and coarsen the detail of the print (which is itself a reproduction). These iterative displacements of both the appearance and the substance of the piece over a period of time are neither unique to this image nor to digital media. But stopping to think about the mediations made possible and even demanded by digital media gives pause for considering where and what the work actually is.

Perhaps the digital version, existing outside real time and space and carrying with it the capacity for infinite change, is best seen as an independent but related idea for an absent work at a given point in time; that is, less a reproduction or representation of the work and more a stage in a continuous flux and process of drafting and redrafting, offered up to be passed on from screen to screen until it drops away from sight through dilution, exaggeration, reappropriation or exhaustion. The digital ‘elsewhere’ chimes with the sense of the word as a signifier of absence. Something about the possibility of infinite reproduction spiralling away into this space of an elsewhere fits with my memory of the triple mirror, and I feel both excitement and loss..

Liz Collini graduated from the Royal College of Art in 2007 following a BA in Fine Art at London's Middlesex University. Before studying art she worked as a manager in a large public sector organisation. Her prints, drawings and installations have been shown in group and solo shows in the UK and overseas, including Japan, Finland, Portugal and France. Liz has had work selected for the Royal Academy Summer Exhibition on several occasions. A large site-specific printed text was commissioned in 2011 for permanent display in the Victoria and Albert Museum. In 2010 Liz co-curated an exhibition of extended printmaking in Lisbon's City Museum with staff and students from the RCA. She was invited to make significant pieces for the 2009 and 2011 International Text Festivals in Bury, UK. Liz lives and works in London and makes prints with East London Printmakers in Hackney.