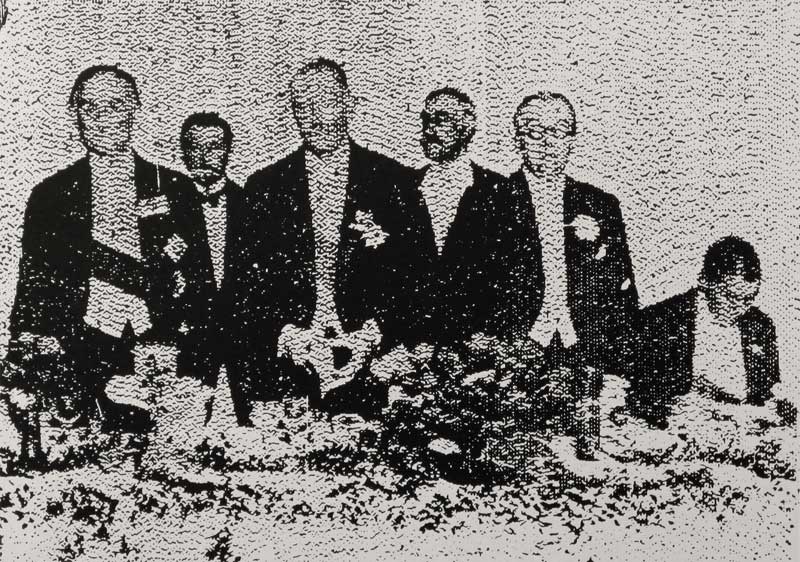 In contrast to almost all other types of ghosts, the quadrature can only be seen in the displacement caused by phase errors. It's an artifact produced in transmission, often appearing as a pattern of interference in unexpected places and at completely unanticipated moments. Its appearance is marked by the strange quality of being both something that obscures, and at the same time, recognizable only in its otherness. Its very lack is what defines its uniquely identifiable face.

Sometimes its appearance is transient, passing in the clouds or in a moving image on the television; other times, its mark is more permanent and its face can be seen in the sides of rocks that are tens of thousands of years old or in the grain of wood that's been milled from an ancient redwood tree. This ghost is a mischievous one. There is no discernible reason to the phenomenon; it’s created of pattern, recognized through repetition and, as far as anyone can tell, completely random. What follows is a partial inventory of recorded encounters.

The store manager of Bongo Java, a coffee shop in Nashville, discovered a cinnamon bun in the pastry case that had a curious presence. After inspecting it, he noticed the face of the quadrature ghost and preserved the bun with shellac, displaying it in the store until it was stolen in a robbery on Christmas morning in 2005.

That same year, a man stepping out of his shower noticed the same face along the plaster wall that framed his bath tub. The shape appeared in a growing water stain that had formed from a slow leak in the plumbing. This part of the wall was later removed and sold on a popular auction website.

On June 11, 2003, Lorna Dibona, a woman in her mid-sixties, noticed the image of the ghost in the window of a hospital in Milton, Massachusetts, just outside of Boston. After much controversy, the sighting was attributed to a broken seal in the double pane glass that allowed moisture to gather in between the windows.

A kid in Wales noticed this same face in a lid of Marmite as he was putting the yeast spread on his toast. Family members Claire, Gareth, Jamie, Robbie and Tomas later all confirmed the existence of the image.

The quadrature ghost was discovered in reflective glass on the exterior of abusiness in Clearwater, Florida. A photo that was later taken of the window appeared to show an image of the ghost next to the ghost itself. This happened just a month before a vandal smashed the windows, permanently destroying the image.

A storm hit during a flight to Tampa, Florida in August of 1973 causing a rough patch of turbulence. Panic ensued among the passengers as the oxygen masks fell from the ceiling, but the weather soon passed. Just before the plane began its safe descent, Frances Pennline looked outside the window to snap a photo of the clouds left behind by the storm. Later that week, when she picked up her film from the drugstore, she found the face of the ghost floating in the clouds in the photograph that was taken on that day.

Diane Duyser started to take a bite of her freshly made grilled cheese sandwich when she noticed the image of the ghost looking up at her. She kept the sandwich for 10 years surrounded by cotton balls in a plastic container, which she claimed gave her good luck. She later sold the item on eBay for an undisclosed sum.

In 2006, a woman in New Zealand found a small pebble at Kaikoura's South Beach with the face of the ghost on it. Others later reported that they saw the faces of journalist Mark Sainsbury, Paddingon Bear and Guru Nanak in the same pebble.

A year later in the same town, reports flooded into a local newspaper that an image of the same ghost had been discovered on a 5-year-old fence post.

Donna Lee of Point Place, Ohio, discovered the ghost on the back of a pierogi while making the pies for her family one afternoon. The Lees put the pierogi up for auction and sold it to the winning bidder, Golden Palace Casino, for $1,775.

Construction workers in late summer of 2003 noticed a curious image in a tree stump after clearing trees near Route 21 in Passaic, New Jersey. Some visitors claimed supernatural healing powers, including one incident where chest pain was relieved and another that reportedly resolved arguments between a fighting couple.

Cody Trepte is a Los Angeles based artist who works primarily in drawing, printmaking and photography. He has exhibited both nationally and internationally, including: Eleven Rivington, New York; Centro di Cultura Contemporanea Strozzina, Florence; Steve Turner Contemporary, Los Angeles; Austin Museum of Art; Weatherspoon Art Museum; and Kunstverein INGAN e.V., Berlin. Trepte has published writings in ...might be good and The Highlights and recently curated On The Line for Los Angeles Contemporary Exhibitions. He received a B.F.A. from New York University in 2005 and an M.F.A. from the California Institute of the Arts in 2010.