Fingerprints and ink on paper, Variable dimensions
Edition of 5 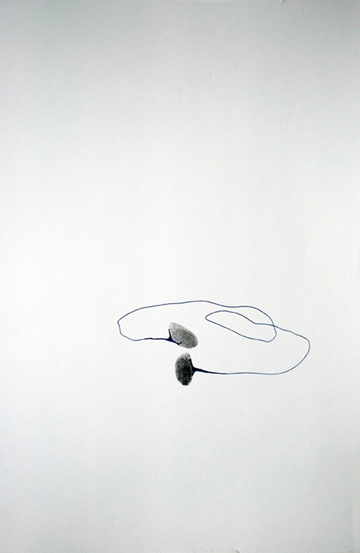 << To substitute for love the letter of love? To deterritorialize love >> 1

Once upon a time, before the wide-ranging use of telecommunications, love letters were one of the few ways for a couple to remain in contact. When one of them was posted or stationed some distance from the other, the “being apart” often intensified emotions, and the desire for direct communication often led to a letter expressing love, longing and desires. Kafka’s love letters are contradictory documents that reflect much of his writing character. They express opposite feelings: longing for someone and at the same time, great fear of an actual meeting. Duality, ambiguity and absurdity distinguish his oeuvre; they are strongly dominant in his love letters as well. The letters can be read as a sort of “description of a struggle.”2 This inner struggle results in flowing words over the sheet; like poisoned ink, it contaminates the message it should deliver. Without an addressee, the letters cannot exist, and the terror of an actual meeting motivates him to write even more.

In their book about Kafka’s literary machine, Gilles Deleuze & Felix Guattari dedicate a whole chapter to one component of Kafka’s oeuvre, his letters. They describe his letter-writing as an act that brings Kafka blood and gives him the force to create. What Kafka sees and experiments with in his letters ends in a perverse and contradictory utilization of it. He carries out a correspondence with his lovers, without ever meeting them, “...the feared conjugal contract a pact with the devil. The letters are inseparable from such a pact; they are this pact itself...” 4 Just like a ‘blood pact,’ Kafka signs a ‘love pact’ with the beloved one; however, instead of blood and fingers, he uses paper and ink, through which he tries to accomplish his wish for a relationship at a distance. The lack of ‘real’ love fills Kafka’s “literary machine;” the absence of the beloved one makes him fall in love even more. The women he writes to want an alliance, they desire a relationship, they long for a meeting where they can see, feel and have physical contact. Nevertheless, they encounter only his handwriting, thus his hands stay untouchable, instead writing out the distance. There are no physical liquids in his love affair. Kafka is sterile in that aspect. He prefers to exchange ink rather than bodily fluids, to keep his distance, and never get involved and caught up in a marriage.

They are how he builds screens/walls, thin as paper, covered with heavy and thick ink, (poisoned ink?), separatrelationship/a marriage. The ongoing flux of letters replaces the encounter; they flow between him and the desired women, going back and forth, preventing an actual encounter, a terrifying face-to-face meeting.

<< To substitute a destined addressee for destiny.. >> 6

Kafka’s love letters create “a topography of obstacles, a map of Thebes...”7 As in an enduring war in which both sides have a constant need to protect themselves, by keeping a distance, lovers become accomplices. Their dialogue turns into a battle, the sheet transforming into their field and distance their stimulating force so as to save the liaison. And so the possibility of love is the love itself.


The drawing you see above was made by the artist’s fingerprints of both her left and right index fingers. Each drawing in the edition of 5 for MATERIAL will be unique and made to order. The artist asks that anyone who purchases a drawing, stamp one fingerprint on a blank piece of paper and then mail it to the artist, who will complete the drawing by stamping her own stamped fingerprint and drawing the thread to connect the two. The drawing will then be sent back to the owner.

Keren Benbenisty (Israel, 1977) has been living and working in Paris since 1998. She graduated in 2004 from the École Nationale Supérieure des Beaux-Arts de Paris. In 2003, she received a scholarship for the USA. She resided in LA and studied at CalArts. In 2009, she was a resident at Skowhegan School of painting and sculpture in Maine. She has shown in several group exhibitions in Europe and she is represented by LA B.A.N.K Gallery in Paris.

Her work investigates the emotional depths of the individual and its relation to language. Using drawing, video, and installations, Benbenisty aims to create “contemporary relics” that straddle diverse cultures and temporal perceptions. She transforms everyday objects, ready-mades, ephemeral materials and texts through minimal interventions or economic gestures.