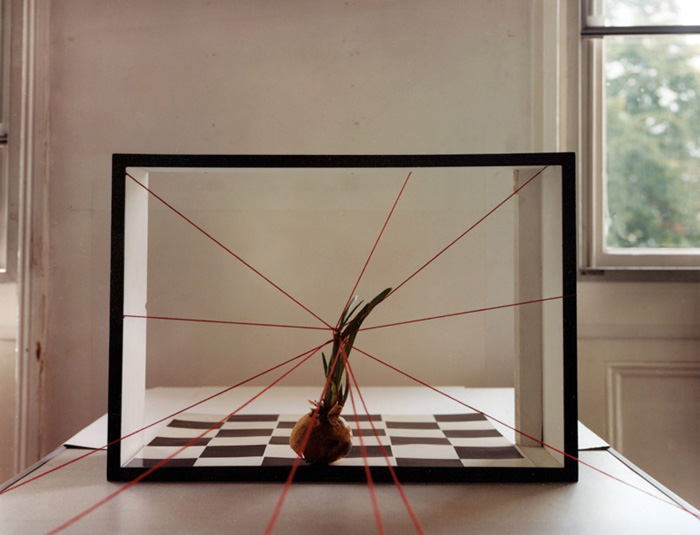 In the archaic Ladino dialect of the Spanish Sephardic Jews (or Marranos), to ‘stroll’ or to ‘take a walk’, was expressed by the reflexive active verb pasearse. It could possibly be translated as ‘to walk one-self’. With no literal translation readily available even in modern day Spanish (an equivalent would be pasear or dar un paseo), the term was passed on to us via Spinoza’s writings (1).

In its temporality the photographic image is paradoxically hovering between a past and present, movement and stillness (2). I want to open up this very instant, exactly this transit space of the frame, this interval of photographic time, that I define as belonging to a present tense, yet a paradoxical present tense that allows time to fold back in on itself. It allows, in Spinoza's words: ‘to show oneself as walking’ (3).

The space (of the frame) opens up an active-reflexive state of being, belonging to the time of pasearse.

[...]
Now it is late afternoon. The sun still shines brightly, but has started its descent slowly into the horizon. The shadows are very long, the branches of trees stretch out like fingers of a hand loaded with numerous jewelry. Underneath my feet the earth feels soft but dry and dusty. Now my burnt skin from prolonged and unnecessary sunbathing is attracting fine dust from the road. The small road is a dual carriageway, hastily laid out from the soil and is the path connecting the beach to the summer vacation homes that are about half a kilometre's distance.

The smell of sea-salt still follows me as I come away from the sea, headed for the plain. All around me are vineyards and small olive groves. But I am headed for the one that is further up the slope, a little further off from the main road.

The cicadas have gone to sleep now, no more loud noises. I am making the walk swiftly. It has been a fairly hot day. Looking down, I see my feet, now quite dirty. Up the slope, now following the path, I turn into the grove; it is open without any fencing or means of enclosure from the main road.

The soil of the grove is well looked after. The farmer is careful to cultivate it so that no weeds or parasites grow around the olive trees. I duck to avoid the branches. Olive trees donÅft grow much higher than little above eight meters. A number of small leaves brush my arm; I can feel their smooth side but their rough side tickles me. I reach out and absent-mindedly tear out a couple of these deep green-grey leaves to have in my hand.

Now, having passed the first trees in the carefully aligned rows, I am in the grove and I see in front of me, slanted in the slope, all the rows forming vertical and horizontal lines. Apart from the rustle of the leaves, and some far away mixed noises, nothing. I find a space under one of the trees; I kneel down to scratch the skin previously attacked by mosquitoes. Slight ruffle of the leaves from the summer breeze. I look upwards through the branches. The leaves come together and part again in a condensed moment that only a photograph would be able to capture its distinct successions.

Movement implies traversing a known space, it implies jumps from one place to the other. I can be just as lost in this perfectly aligned grove of olive trees, as I can be in the winding paths of my thoughts. What about traversing the places in the mind where memories meet, come together as a whole and then part again — anticipating the metaphorical play in the movement of the leaves?

This text is a small excerpt from Stella's doctoral thesis, "Photograph(ing) the landscape of memory" completed in 2007 at Goldsmiths, London.

(2) The theme of movement/stillness is re-occurring in recent (film predominantly) theory See: Mulvey, Laura. Death 24x a Second. London: Reaktion Books, 2006 and Bellour, Raymond. "The Film Stilled." Camera Obscura 24, September (1990): 99-123. The theme of image/memory has recently been addressed by: Burgin, Victor in: The Remembered Film. London: Reaktion Books, 2004. Drawing from the above it is perhaps possible to develop a separate theory of the still image/photograph and position it in its contemporary context of both analogue and digital. This therefore means taking up the frame as an opening point, as a point of ‘transference’ that is constantly renewed in the present.

Stella Baraklianou a photographic artist and lecturer, Stella Baraklianou obtained her PHD as a practice based researcher from the Visual Arts department at the University of London, Goldsmiths, in 2007. Prior to that she completed the MA in Photographic Studies at the University of Westminster, London (2002) as well as other studies in her native Greece. She has exhibited in Europe, most recently at the PhotoBiennale in Greece (Thessaloniki Museum of Photography, 2008). Other exhibitions include XS at FA projects, London and Fragile Distance, Academy of Arts, Estonia. She lives and works in Los Angeles.