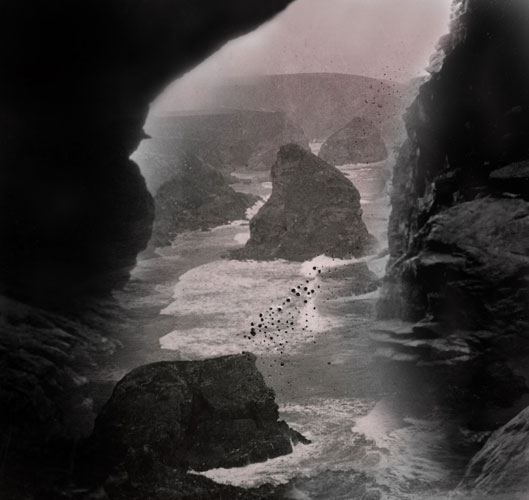 The air has cooled now that the sun has set. The humidity has given way to a tepid breeze. Walking into the water, it feels as though I am lowering myself into something thick and warm. It sucks me in, pulling every limb under its cloak. Beneath the still membrane of the lake's surface boils a viscous liquid, covering every cell of my skin. Layers give way to cooler temperatures, and the complete darkness seems to change to an even denser shade of black. I am no longer sure whether my eyes are open or closed or how long and how far I have been swimming downwards. A burning in my chest demands that I turn back and let the water push me out and pull me to the surface, yet this is entirely against all other instincts to continue in. I let go and shoot up through layers of gradually heating liquid, until my head breaks the surface and my face is hit by the night air. Gasping to fill my lungs, I feel the bottom half of my body still within a warm grasp, separate from my head and shoulders, so heavy and cold now above the protective surface. I let myself be pulled under once again, constantly anticipating the possibility of the membrane breaking and some part of me, a shoulder or a foot, becoming exposed. Curled into a ball I tip and turn, swaying with the unified pulse, until again I have to break out and breathe. This time I stand up and begin to wade slowly, heavily and with difficulty. With every step my body becomes heavier, denser, separated and once again mine. I hover at the edge, my feet and ankles still firmly within the clutch of water. The air now cloaks me differently; the air floats by, softly teasing. I drag my left then my right foot out and stand for a moment sinking into the soft sand. I could turn and run back in, shedding the weight and seclusion of my body as I dive towards centre. But I am tired, and now I am comfortable and accustomed to my separateness.

Esther Teichmann born in 1980 in Karlsruhe, Germany, German-American artist Esther Teichmann received a Masters of Fine Art from the Royal College of Art in 2005. She continues to live and work in London as senior lecturer at the London College of Communication/ UAL, the University of Brighton and a PhD candidate at the RCA. Teichmann’s work has been internationally shown and published, with group shows in London, Los Angeles, Berlin and Modena amongst others Recent shows include a collaborative show with artist Spartacus Chetwynd at the Giti Nourbakhsch gallery in Berlin (July 2007); The Esthacus Teichwynd Photo, from which the images produced have been published as portfolios in the biannual publications, Piktogram, 032C and Rodeo. Recent solo shows have been at Man&Eve gallery in London in Oct 2007. Teichmann’s work was included in a group show curated by Filippo Maggia, In Our World: New Photography from Britain, at The Modena Civica, Italy and a group show in London, (Anticipation), curated by Kay Saatchi and Catriona Warren (July/ August 2008), as well as this year's New Contemporaries and Artsway Open. Her next solo show at Man&Eve, will be in September/October 2009.