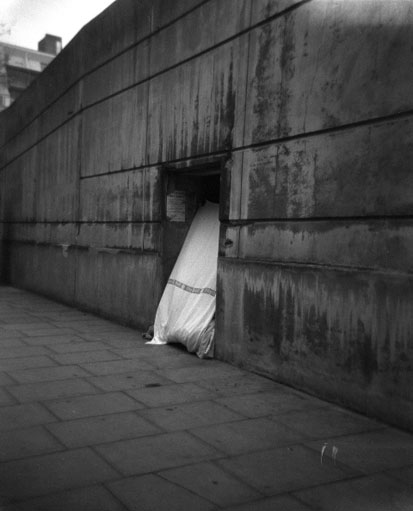 S IS FOR SPACES

Small Spaces & Travel Despite appearances, truth be known, space is only as big as the locale in which one finds oneself at any given time, no matter how large or small. Travel, on any scale, adds new ideas to the place one is in or the one one moves to next. All travel thus adds multiple dimentions to an individual life and cannot be taken away. The voyage simply continues upon return, although the desire to descend once more into unknown places will be forever strong. Much has been written on this very subject.

Dark Spaces Darkened spaces are generally required at dark times. Like the blanket-lined comfort of the kennel a body requires at night, the penthouse suite one dreams or lives at different times, once the light goes out all is vast or small, the mind comatose or on fire. Bad faith will get its victim in the end and all may be lost as readily as gained. In the end all which was not hard found will be lost.

Architectural Species of Play It is only by means of unlimited space that the more experimental aspects of the architectural project can develop. That said, within the confines of a small abode a world of possibilities may issue, if only through the ongoing dream of one day having more space to play with.

On /About the Corner There is a general, not entirely unspoken, agreement that people who sit in corners do not wish to be disturbed. In reality, however, this logic applies only to those of sound mind, although in fact the healthy rarely make full use of the corner. All those silently suffering use corners to seek and request comfort. Mix-ups occur regarding the above and fights break out. Not much can feasibly be done to curb this kind of confusion. Occasionally someone in need is left alone, just as sometimes comfort is offered, and occasionally found, in the strangest and darkest reaches of a corner.

Coda Between about 1995-2004 I spent a lot of time at the Brunswick Centre, an architectural project built between 1965-73 in West Central London. The building is a fine example of 1960’s British social housing. Due to financial limitations the concrete building was not, at the time of construction, painted and so remained grey for thirty years. Essentially a mini-city of raised residential accommodation - each with its own signature ‘glasshouse’ room - along the centre of which, at ground level, runs a shopping street - a kind of modern, open air arcade. Over the years up until 2005, the shopping street became quite neglected and was often empty apart from the odd old lady with a shopping trolley and a few pigeons. There were a couple of old cafes used mainly by locals, a budget supermarket, a lighting hire shop, a charity shop, a betting shop and a vast, second-hand bookshop.

There was also, however, the Arthouse cinema, the Renoir, but the front of this was to one side of the building and I know of many people who knew of the cinema but had somehow never entered the shopping street and experienced the rest of the architecture. I presume this was due to a tendency to go to the cinema by night. I tended towards the matinee in my early years in London and this is how I discovered the building.

Many of the shopping units were empty for years. It was always a kind of dead elephant, somehow unnoticed right in the centre of London. Over the years I took many photographs of the building. I was very lonely and anxious at the time and remember finding this somewhat depressing place very comforting. I also wrote a number of very short texts, stories, manifestos for movies, all of which are essentially about my contemporaneous experiences and projections onto this particular site. The building loomed large in my psyche at the time.

The photograph and texts that form my contribution to Material’s Limited Edition Project come from this period. Threshold is the only photograph I have printed to date from the hundreds of negatives of the building I have in my archive. The recess in the wall in the photograph no longer exists as such. In 2005 a British supermarket chain financed the renovation of the building and so everything is now very different. In fact, it is now radiant, the street full of high-end chain stores, clothes shops, cafes, teeming with people day and night. The building, now painted magnolia white as originally envisaged, the rusty window frames of the hundreds of glasshouse rooms replaced and gleaming, is as it was always intended to be. I read that the original architect has purchased a property and moved in and that there was some pressure on the social housing tenants who had had the right to buy over the years to sell up. The other small shops in the surrounding streets seem to be thriving. The nearest tube is Russell Square. Upon exiting the tube, take a right and it’s right there, 100 yards along on your left. You can’t miss it.

is an artist who lives and works in Antwerp and London. She is represented by Laura Bartlett Gallery, London. Recent solo exhibitions include German Soup at Laura Bartlett Gallery, London (runs until 14th November) and Malamud at Office Baroque, Antwerp (2008). Forthcoming exhibitions include Karaoke – Photographic Quotes at Winterthur FotoMuseum, The Malady of Writing at MACBA, Barcelona and Evidence of the Paranormal at Klaus Gallery, Brooklyn, curated by Chris Sharp. She has recently been shortlisted for the Max Mara Prize for Women. Her latest book ‘Thomas Bernhard Malamud’ has just been published.