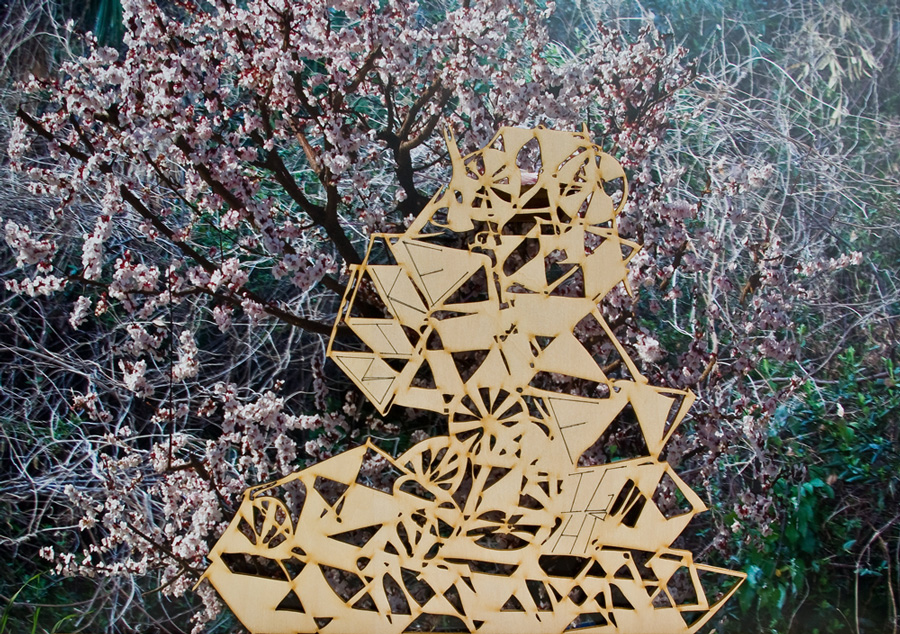 I've always been preoccupied with the wear that objects, living or inert, go through over time. During my youth, alone as an only child, I was curious and interested in textures, fascinated by weathered and broken things: the skin of an elephant's trunk, the bark of trees, rusty dirt clods of my native North Carolina, sharp blades of grass that cut my skin and brought intense rashes. I was allergic to a lot of things then, but I rolled anyway in the hilly fields. I even took my shirt off despite my fragility and afterwards I gawked at my own grassy cuts. I also liked to grind my action figures against our portable fan. I've always found the story that damage tells attractive.

I live in a strange interstitial place in Yokohama. It’s a combination of urban density, industry and small agricultural plots. Next to the power station near my house I came across a pile of mangled bikes in a scrap steel dumpster. I found them there, in the sunset, in silhouette. I rode by the pile on my bike and it was spring and there were these cherry trees with their blossoms hanging over everything. And then in the evening, I rode hard along the path next to the river. It was a new moon so I could only see the faintest of blurring lines beside me and my vision was shifting and I was peddling as hard as I could, wondering if I might hit a pole in the asphalt or run off the road in the next second.

On the streets, with hordes of bikers in the night, it seemed that the sweat and earnest effort made in riding released us from our weaknesses. Below the surface of the epidermis, there I discovered on my own terms some substrata that makes us animate. We make our efforts against the force of decay, going to the raw places, the cathartic ones, where the things that matter most emerge.

Andy Cline currently lives with his family in Yokohama, Japan.  His works in painting, collage, sculpture and photography, explore themes of isolation, elemental forms, and the interstitial regions between form and emptiness.  Andy’s interest in impermanence and causality drive the content of his experiments.  His works have appeared all over the world, wherever he travels.