from the body: Portraits of the Universe, 2011-?, Acrylic, latex, ink and graphite on studio wall + letterpress and screenprint on paper 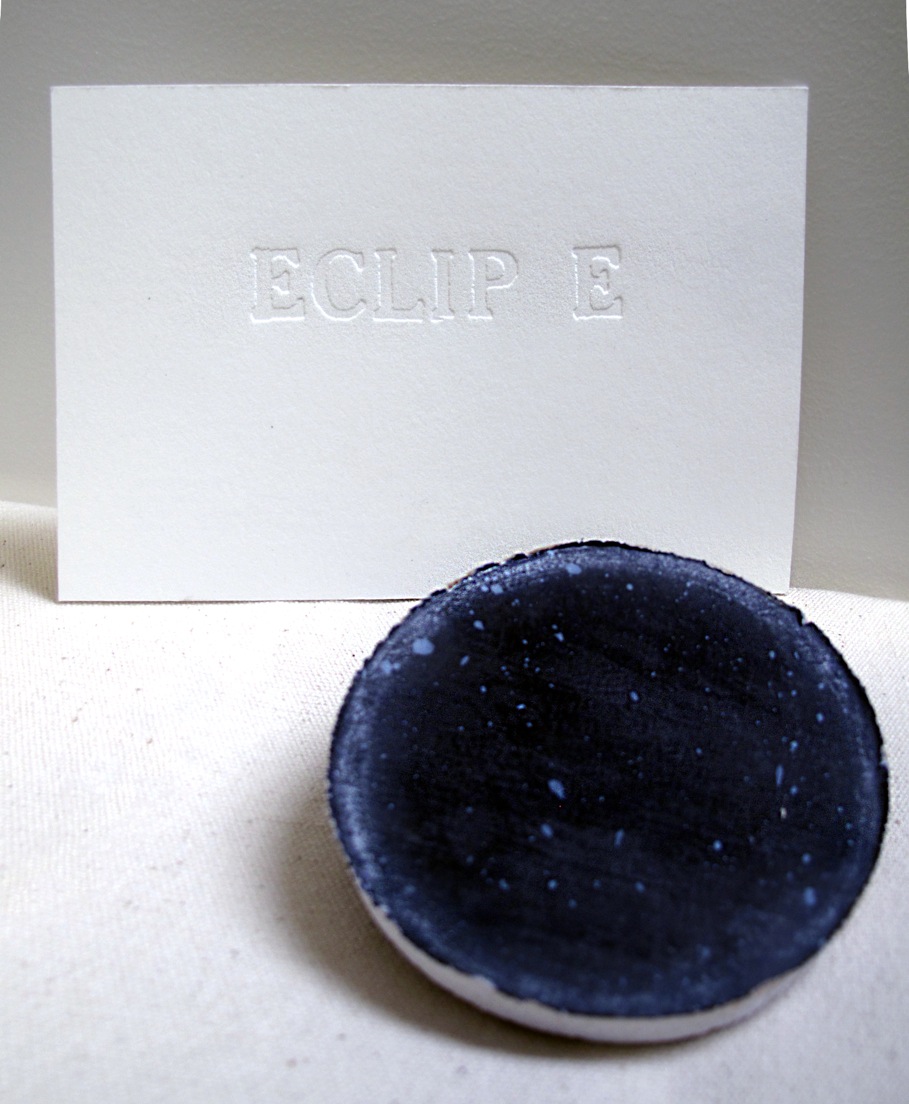 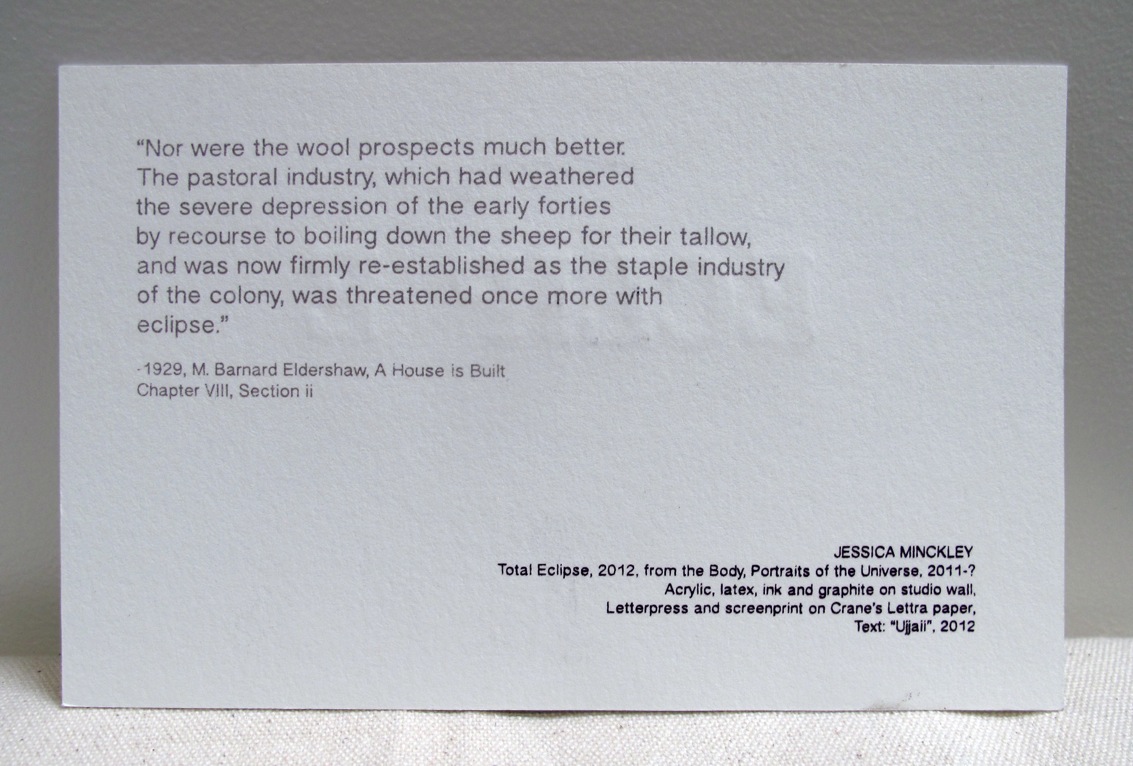 UJJAII
As a high school graduation gift, your mom bought you an appointment to the psychic. Not a car. Not a trip. A psychic.

Eleven years later you remember only snippets of what this woman said. The session was taped precisely so you might revisit it. That was her recommendation. She advised you do this after one month, one year and ten years. You listened to it after one month and one year.

As she began recording, she closed her eyes and asked you not to speak. She commented on things that seemed irrelevant or given- noticing you breathe shallow breaths.

You’d forgotten about the cassette tape since last time you saw it, inside a green, gilded box your mother gave you. This box used to be filled with her special things: a tassel from her nursing school graduation cap, pins from the bygone feminist revolution or Carter election, and newspaper clippings. Most notable was a yellowed obituary of someone, possibly romantic. The tape was inside a manila envelope, perfectly fitted to it. You’d mimicked your mother by collecting odds and ends to fill this box. Documents like voter registration cards and the sole copy of your birth certificate, folded in half, mementos like an empty chocolate box and photographs of lost loves edited from albums for public view.

During a random conversation, you realized it had been over ten years since you reviewed that tape. It took you a while to find time to pull down the box and retrieve the cassette, and even longer to find a tape player to listen to it on. You popped it in and reflexively hit rewind. It clicked at the beginning and you pressed play. You stood alone in your apartment, and waited for the psychic’s voice pronouncing whom you were to marry. You remember she had said that you were a queen, not a princess; that you would be tempted to marry the stable boy, but should marry the king.

You waited for the tape. You heard nothing. You began to be puzzled. You flipped the tape. You rewound it in its entirety on the other side. You pressed play again, began cleaning your apartment and forgot about the tape. You were startled when it clicked, signaling the end of that side. You played the entire other side. Nothing. Maybe, now, this metaphor.

When your father called in April, you were lying in a patch of sun on the floor of the Orlando airport. You’d been waiting for several hours for a delayed plane. It was not unusual that your family members would call and introduce themselves with a “you’d better sit down for this” tone. He did. You were prepared. You were subconsciously assuming tragedy would strike at any moment. If anyone ever called twice in a row, you just knew someone was dead. "I asked your mom for a divorce last night,” he said in his signature baby voice. He paused and waited for your reply. "Okay, Dad,” not wanting to say the wrong thing, yet knowing this was not the right thing to say under these circumstances. He asked if you wanted to ask any questions. You said no. You told him that you were willing to listen if there was anything else he wanted to tell you. He said the type of thing that people in your family say: that he would always be your dad and that he loved you no matter what. You noticed distancing yourself entirely from the situation by the time the conversation came to a close.

Not knowing how on earth someone would respond to this correctly, you hung up with him plainly and, as usual, trying to make sure he didn’t feel uncomfortable. Your family’s typical response to this scenario would be panic: old country, grief-riddled, refusing to eat for weeks after, staring out of windows blankly, wearing black for years. Was it strange to notice yourself wondering immediately how your sister had reacted? You thought: Jesus, she’s going to lose her shit - Greek tragedy-style. She’s going to ask him if she was the first twin he had notified. She’s going to think she caused it. She’s going to try to change it. She’s going to call you.

You were shocked into a state of pure calm after hanging up. You looked at your phone like it was a small person with your head cocked. You might have muttered “huh.” Thirty-one years together, then the intercom: Groups 1 and 2 may now board. And so, you picked up a pair of complimentary headphones on your way to the jet bridge. You looked at them for any answer. You looked, puzzled, at the steward with your eyebrows arched like a rainbow, hoping maybe he’d see what a pickle this was. Pickle soup. Shit soup. You looked out the window.

Last night at yoga, the instructor, Siri, who happens to be your best friend at the moment, asked you – asked the entire class while singling you out with her eye contact – to drop your shoulders several times. She later tucked your shoulder blades under your body as you were lying on the floor when class was winding down. The music had slowed, your sweat was drying and she was directing meditation. You thought about Siri’s toothless poodle, who can’t pee without her there. You thought about Siri’s husband, who at one point wore a gas mask to sleep because he is so neurotic. You know that she obsesses about what her students think about her while she’s doing a headstand. A heart-opening exercise to beats of a pre-recorded gong. This excavated you from your judgment. You were transported to a desert via helicopter like in a PBS commercial. You saw an overlapping image of Mara, an old friend: svelte, ex-ballerina with wispy hair, and shoulders that hunched forward slightly. Siri broke the image montage to call attention to your Ujjaii breath, imploring you to exhale as if fogging a mirror. Mara’s psychologist had once noticed her convex shoulders and reassured her this is what people do when they are trying to protect their hearts.

Jessica Minckley lives and works in Los Angeles. Minckley has exhibited nationally and in southern California, including California State University, Long Beach, University of Southern California, Armory Center for the Arts, Pasadena, Angles Gallery, Carl Berg Gallery and L.A. Louver Gallery. She is an MFA candidate at Otis College of Art and Design, 2013.